Queen Kennedy and Debutante Douglas Have a Ball at Port Stephens 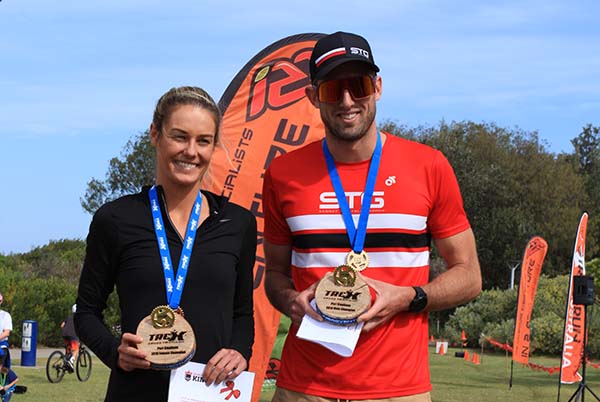 Australia’s premier Off-Road Triathlon series premiered a brand new season, as Port Stephens played host to the first TreX event of 2019/2020.  This years event was also a qualification race for the ITU World Championships set to be hosted in Almere, Netherlands in September 2020.

This time last year, the groundbreaking story was that of Maeve Kennedy, an experienced trail runner, attempted her first ever cross triathlon at this same event in 2018, and created an upset for the ages, as she took out the Women’s Elite Crown.

The local star was back to defend her title, and did so successfully today in the most comprehensive fashion.

Kennedy blitzed the swim leg- despite having never swum until two years ago- and then dominated the bike leg, before excelling in her strong suit- the run home.

The star athlete finished in a time of 02:30:58, which was 16 minutes and 50 seconds ahead of second-placed Connie Silvestri.

Kennedy said it was her most challenging event yet, and also most enjoyable.

“It was hard, like really hard. That took a lot of me. The swim conditions were really tough, and then that bike leg was so hard. But I loved it, I just loved it.”

The two-time Port Stephens Champ says she’s doubling down her focus on this season of the TreX Series.

“I really want to commit to this series. I’m going to try to do all the events over the next six month, and really have a crack at it.”

Meanwhile, the theme of newcomers’ doing so well, continued in the Men’s event.

Debutant Sam Douglas reigned supreme, taking out the Elite category in a time of 02:03:47.

Douglas had never competed off-road before, but was able to take a stranglehold on the race in the bike leg, claiming the lead, and taking a six minute advantage into the run.

Initially, it was young gun Josh Wooldridge who had the early ascendancy, after a commanding performance in the swim.

Wooldridge is an Under 23 representative for New South Wales, and has a big future in the sport.

His swimming in the trying conditions of Fingal Bay, as the tide surged in, was the talk of the morning.

But as the race wore on, experienced stars Jake Stollery and Taylor Charlton were able to edge Wooldridge off the podium, and into fourth position.

Meanwhile, the Champion Douglas was joined by his fiancé Sam at the finish line, and she was ecstatic.

“Well the deal was, if he wins, we go to the fancy restaurant Bannister’s and have oysters and French wine. And he won. So, we’re going,” Sam said.

Douglas himself was shocked and excited by the win, and agreed on the oysters.

“I can’t believe it, to have won this event. But I absolutely loved it. I’m thrilled. And yes, we’ll be off for a nice meal now!”

Full results, photos and videos can be found on the links below or by visiting the event website at trextriathlon.com.au.

TreX is Australia’s home grown national cross triathlon series.  For thirteen years TreX has positioned itself as the pinnacle of the cross – or off-road – triathlon racing in Asia-Pacific. Presented by the premier outdoor adventure event specialists In2Adventure, TreX consists of a swim, mountain bike and trail run. While each TreX event features an open/elite category the TreX Cross Triathlon national series invites participation from all ages and skill levels.

In2Adventure are Asia-Pacific’s premier adventure event specialists, and the proud hosts of the 2016 ITU Cross Triathlon World Championships. With a full calendar of national events scheduled throughout Australia, including cross triathlon, XC Mountain Bike, trail runs and corporate events, In2Adventure fully embraces all things ‘off road’ and ‘off the beaten track’ and offers a unique, individual experience for all ages and skill levels.