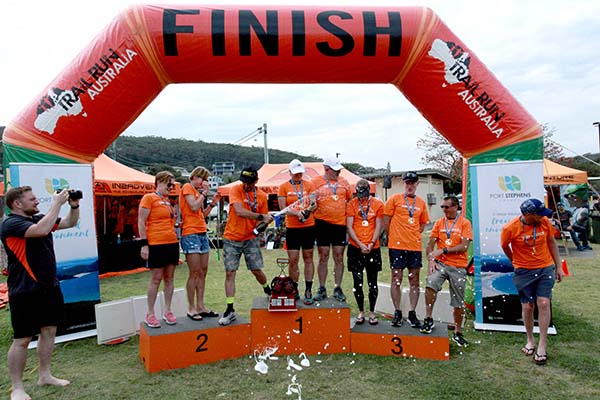 As Port Stephens turned on one of the most physically demanding courses in the national TreX Off Road Triathlon Series and Trail Run Australia Series, it was Queenslanders Simon Nendick (Team Infinit) and Connie Silvestri (Qld Off Road Tri Team) who reigned supreme to capture the Dirt Master Championship from an incredibly strong field from across the nation.

Simon Nendick and Connie Silverstri are long-celebrated stars of Australian Cross-Triathlon, and they are now making a major impact on Trail Running.

The Dirt Master competition challenges athletes to take on the TreX Off-Road Triathlon (1000 – 15 – 6), and the Trail Run Australia Half-Marathon in the same weekend.  The competitor with the fastest aggregated time claims the title.

Nendick missed the corresponding bayside events last season after a major injury, breaking his leg in a fall.  He has been on the long comeback trail ever since. In fact, he only recently had a metal rod removed from his leg.

The Englishman-turned-Aussie who races with Team Infinit set his sights on the Dirt Master Title this weekend, and says he is digging deep within himself to see what he is capable of.

“I just love it. I keep trying and trying to find a race and a challenge that is so big that I can’t finish it.”

In2Adventure event Director Robyn Lazenby commented “I don’t think we’ll ever find a challenge that Nendick will not take on.  He is such a strong competitor, but also such an amazing person on and off the field.  He is such a special part of our In2Adventure family.”

Nendick completed this weekend’s two events in a combined time of 04:32:17, ahead of second-placed Terrence Withers who finished in 04:39:14.

Connie Silvestri, like Nendick has competed for Australia at World Championship level, and has long dominated the off-road triathlon scene.  In fact, she is one of only two athletes, the other being Aussie Champ Ben Allen, to take out the Australian Dirt Master title by winning ALL Dirt Mistress events across the country in one season.

She’s now taken up the extra challenge of the Trail Run Australia Series, and has been vying for another Dirt Mistress title.

This opening round at Port Stephens saw Silvestri excel in both events, completing them in a total winning time of 05:03:54.

Silvestri dominated so much so, that her time was 58 minutes and 50 seconds ahead of second-placed Jackie O’Hare.

The Queensland star said that her preparation had been far from ideal.

“I’ve barely been able to train for the triathlon events, but I keep coming and just trying to get things happening on the day.”

Nendick and Silvestri were both glowing with joy, and covered in champagne on the podium post-race.

While the junior event- the Dirt Dude- was won by Samuel Buffet and Annika Ingwersen.

TreX is Australia’s home grown national cross triathlon series.  For thirteen years TreX has positioned itself as the pinnacle of the cross – or off-road – triathlon racing in Asia-Pacific. Presented by the premier outdoor adventure event specialists In2Adventure, TreX consists of a swim, mountain bike and trail run. While each TreX event features an open/elite category the TreX Cross Triathlon national series invites participation from all ages and skill levels.

In2Adventure are Asia-Pacific’s premier adventure event specialists, and the proud hosts of the 2016 ITU Cross Triathlon World Championships. With a full calendar of national events scheduled throughout Australia, including cross triathlon, XC Mountain Bike, trail runs and corporate events, In2Adventure fully embraces all things ‘off road’ and ‘off the beaten track’ and offers a unique, individual experience for all ages and skill levels.

Queen Kennedy and Debutante Douglas Have a Ball at Port Stephens